Why do infants suddenly die? Why did Satan marry Lilith? Why do Jewish parents pass their boys as girls?

Our world is filled with mysteries that often seem unrelated. Consider Sudden Infant Death Syndrome (SIDS) or cot death, this form of unexplained death occurs when a seemingly healthy infant (0-12 months) dies in sleep with no cause of death established in a post-mortem investigation. Consider the peculiar choice of Samael (the Satan in Judaism) in Lilith, a rather unknown Mesopotamian demoness, for a bride after a long millennium of bachelorism. Finally, crossdressing– already defined as a puzzling practice, but the directionality (boys as girls) used by Jewish parents is perplexing. Could it be that all these mysteries are related? Let us start with the first one.

Although many risk factors are known (e.g., maternal smoking and bed sharing), SIDS remains the leading cause of infant death in many developed countries (~2,700 deaths annually in the US and 300 in the UK) and a source of grievance for parents. SIDS has four main characteristics that can give us a clue about the causes, namely male predominance (with a ratio of 3:2), that the SIDS rate is 39% lower among US Hispanic compared to non-Hispanic people, a seasonal variation with most cases occurring in winter, and that 50% of cases occur between 7.6 and 17.6 weeks after birth with only 10% past 24.7 weeks. In 2016, I proposed the allostatic load hypothesis for SIDS, which states that prolonged and repetitive exposure to stressors (e.g., bed sharing) has a cumulative effect that increases the risk of SIDS. 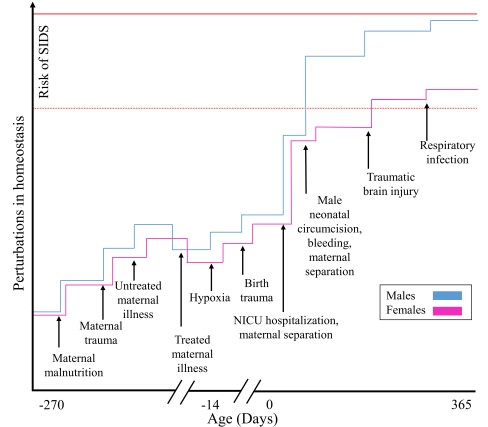 Illustrating how SIDS is explained by the allostatic load (“wear and tear”) model for males and females. From Elhaik (2016).

I thought to test this hypothesis with two phenotypes—neonatal circumcision and prematurity—using global and US datasets.

Until the 19th century, neonatal circumcision was practiced almost exclusively by Jews, some Muslims, and certain African cultures for religious/ritual reasons. During the 19th century, British and US physicians increasingly came to see masturbation and the foreskin as disease‐inducing and circumcision as a potential cure. By 1940, ~40% of British boys and 80% of US boys were circumcised as a preventive health measure. Historically, neonatal circumcision conflicted with the Greco-Roman perspectives that opposed injuring the body and its introduction in the UK emphasized this conflict. After World War II, circumcision rapidly fell out of favor in Britain. By contrast, the combination of capitalism and absence of social medicine in the US, created a fertile ground for profits and the unnecessary surgery was promoted as “preventative” and “healthy” reaching a rate of about 95% in the late 1960s, then declining to about 65% by 1999. Americans vary in their acceptance of circumcision. US Hispanics associate themselves with the cultural values of Spain (Europe) and Native Americans, both of which rejected neonatal circumcision and have the lowest circumcision rates. Blacks are split between memories of forced circumcision to sexually oppress them and a desire to belong to the White class, which has the highest circumcision rates. Consequently, Blacks have intermediate circumcision rates. Today, greedy US pediatricians equate the importance of circumcision to that of vaccines, which further undermines the importance of the latter.

In a society where health is believed to be a commodity and doctors start their careers with a debt of $250K, this is not surprising. But what is the truth? 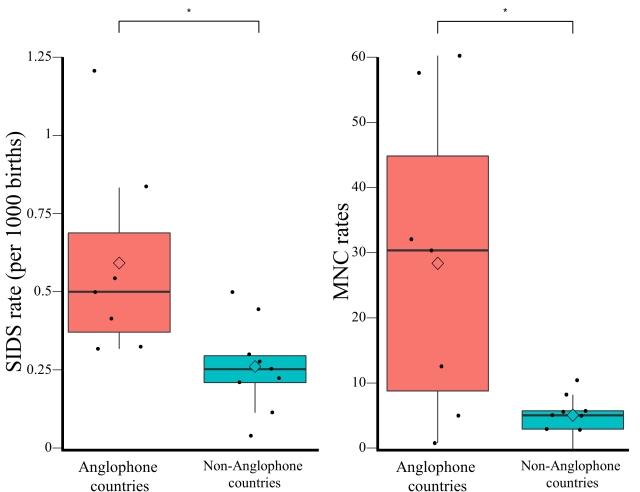 SIDS and circumcision rates in Anglophone versus nonAnglophone countries. From Elhaik (2019)

I also showed that there is a correlation between the proportion of Hispanics in a US state and the SIDS rates.

The contribution of MNC toward SIDS gender bias in the US. From Elhaik (2019)

In other words, a large Hispanic population will lower the SIDS rate of a state, although, on average, Hispanics have lower socioeconomic status, which is strongly associated with SIDS. Not only that, in US states with a high proportion of Hispanics, the SIDS gender bias was closer to one, that is males and females died in even numbers. Showing that neonatal circumcision explains a large proportion of the gender bias in SIDS strongly support it being a risk factor along with preterm birth, which was also found to be correlated with SIDS in the US and worldwide datasets. Circumcised boys born prematurely were at the highest risk, in support of the allostatic load hypothesis. But why do some infants die unexpectedly and some do not?

Circumcision is associated with many risks, including bleeding, shock, sepsis, circulatory shock, hemorrhage, pain, and long-term consequences – all of which contribute toward SIDS through various biological mechanisms. For instance, during circumcision, there is an increase in the blood pressure, breathing rate, and heart rate. Even with the most advanced techniques, bleeding occurs in over 15% of the cases, in which case there is a danger that lower blood volume would result in low blood pressure and a reduced amount of oxygen that reaches the tissues. Reduced blood pressure has been associated with obstructive sleep apnea, a condition where the walls of the throat relax and narrow during sleep, interrupting normal breathing. Unsurprisingly, SIDS victims experienced significantly more frequent episodes of obstructive sleep apnea. Preterm neonates experience over twice the rate of bleeding complications than full-term neonates. Circumcision-related complications are unavoidable. Add to that an infant with sick relatives and you can easily see why most deaths occur in the winter 2-4 months after birth when the natural protection from the mother’s antibodies wears off. 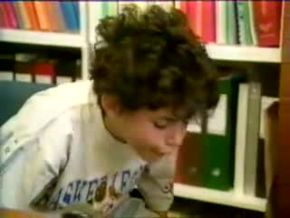 A boy with pertussis. From Wikipedia.

Lastly, we must ask, if the ancient Jews adopted neonatal circumcision as done today since the second century BC, which would have resulted in an immediate increase in male infant mortality, is it possible that they figured it out? I believe that the answer is yes, only that like American physicians do, their spiritual leaders, the Pharisees diverted their attention from the harm in the surgery and blamed it on Lilith – a beautiful, taloned foot demoness. 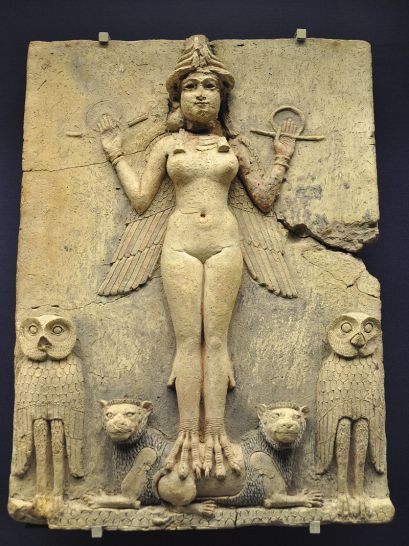 A clay figurine originated in Babylon (1800–1750 BCE). Now in the British Museum. Believe by some scholars to identify the figure of Lilith or a related goddess. From Wikipedia.

Lilith fast ascended in the demonic hierarchy until she married Satan in the 13th century evidenced the terror she exerted on parents, which lasts to this date. Deceiving Lilith into believing that the newborn was a girl by letting the boy’s hair grow and even dressing him in girl clothes during infancy were the most effective means to avoid her harm – a trick that Palestinian Jews learned from their Muslims neighbors in the Middle Ages.

This is NOT a little girl, regardless of what Google thinks

Search results for the image

The traditions that tie Lilith to the fear of death during the circumcision period suggest that the ancient Jews were very close to deciphering the cause and effect mechanism of SIDS reported in my study, and should at least be credited with the identification of SIDS as we know it today, 1.5 thousands years before it was formally defined.

Wikipedia’s editor Dr. James Heilman has blocked all edits on the SIDS article after someone tried to include circumcision as a risk factor. It seems that it is not enough for James Heilman to be “MD, CCFP-EM, Clinical Faculty member of the Department of Emergency Medicine, Faculty of Medicine, University of British Columbia (Clinical Assistant Professor” he also wants to be a little Dictator. Needless to say that the Circumcision article has been blocked a while ago.

1 Response to Why do infants suddenly die? Why did Satan marry Lilith? Why do Jewish parents pass their boys as girls?