Why LivingDNA must die?

Living DNA was set up by David Nicholson and Hannah Morden in 2016. The firm is based in Frome, Somerset, UK. They had an average of three employees in the year ending December 2017. Now they have four. Since LivingDNA wants you to think it is a big player it constantly pushes its name to websites that compare DTC companies (for a good price, you get to be on top!). Three years is a long time to build a successful product. GPS Origins was launched around the same time and is now in every drug store in America. I thereby felt that this is a good time to review the accomplishments of LivingDNA from their users’ perspective.

What is Living DNA?

Living DNA is a UK genetic testing company that specializes in one thing: telling people that they are English. They do so by comparing them to modern-day people who claim to be English and then provide them with a UK map with 21 origins from where their ancestors came from. Theoretically, there are 59 more potential regions, but no one signs up for this test to see those regions.

LivingDNA provides a horoscope like results cannot be validated unless, of course, you are a hard-core Brexiter who thinks that your ancestors go back to the Cheddar Man (who was dark skin, by the way). Any primary school student learning the history of this country would see the problem with this. The English are so diverse that their DNA is a map of all the peoples that have conquered and colonised the island. Because the English are so diverse, almost every user’s results will show an English origin with that test.

You want to be fooled.

Here is what you get. 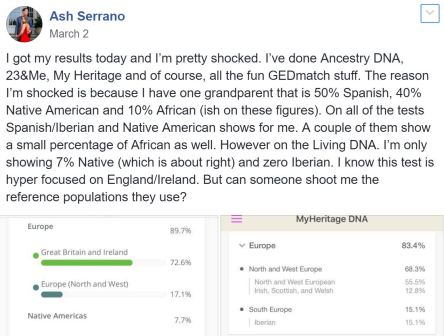 Malcolm had no Welsh ancestry. In reality that is, because in LivingDNA’s alternative universe he is 14.2% Welsh.

By contrast, Bob who had solely Irish ancestry is reported as having almost none. Bob is apparently an English too.

This goes on and on. And this is just for Walse and Ireland, regions that we can all identify on the map and have a well-known history.

Coming from a company that claims to pinpoint your ancestry to no less than 21 regions within the UK, this is embarrassing! Achieving such resolution is, of course, an impossible task without ancient DNA.

Whether Living DNA or Mark Thomas who promoted it, like it or not – people moved and quite a lot. So how can Living DNA possibly predict these ancestries accurately? Short answer, they cannot. They either get lucky with an Englishman who finds their results fascinating or they screw up big time with everyone else. 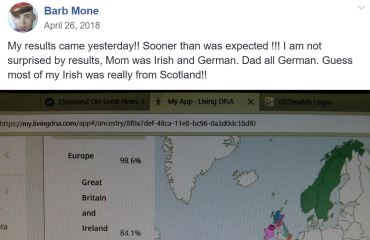 Don’t get me wrong, I don’t claim that the test doesn’t work. On the contrary, I believe that it does exactly what it supposed to do with the overall accuracy of a stopped clock.

Heather’s English ancestry just got bumped from 1% to 98.2%! Too bad you cannot buy tomatoes with those percentages.

Living DNA’s database is also so small that people cannot find family relatives and what they do find is incorrect. Bill found 0 matches in LivingDNA’s tiny database. Hardly a surprise.

The second problem with a small database is that populations are misrepresented, which results in many false positives and the inability to correctly predict individuals to populations. Italians like Bryan, are usually quite easy to localize. However, since LivingDNA’s database is off, he got all the possible answers for a white guy. Yes, England too!

Putting it in plain terms, LivingDNA sells a certificate that you are English. If you don’t care about the truth, this is the company for you, just be warned, you can print yourself the same certificate for free.

I pity anyone who uses LivingDNA for a serious investigation or academic research. It would be very easy to criticise such analyses due to population stratification.

Amazingly, this type of service is not even the biggest problem with this awkward company.

LivingDNA suffers from a chronic disarray

New companies usually have some teething problems. This and that doesn’t work and this just got broken. This is all understandable. It happens to every new business. For LivingDNA, though, these problems became chronic. We are now three years from their launch and users still complain that their results have disappeared overnight never to return.

Provided how they ignore their users, it simply seems like a scam 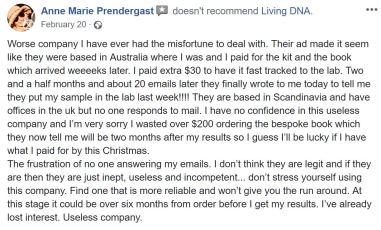 and so on and so forth…

You can find all these complaints and more on the company’s FB page. No one even bothers responding to these users who spent a lot of money and got nothing. The only ones who are happy are either their beta-testers or those who uploaded files.

Is LivingDNA in big financial troubles?

Since LivingDNA was founded, three years ago, it failed to fix its website and its algorithm. I am guessing that the company is in big financial troubles.

First, because recently, they cut their customer support in what seems to be a desperate attempt to save money.

Now LivingDNA users have to rely on random FB users to explain their results (as if they know anything).

Unfortunately, some people learn the hard way the meaning of “support” for LivingDNA.

It unfortunate that people were misled into buying such a poor product. Though I would be more concerned about what will happen to my DNA data when the company would finally go out of business?

Second, they have a very small number of new users. This was obvious by the lack of matches, but also from their long turnover time for genotyping users, which has been reported to be 12 weeks. LivingDNA is now using the Illumina GSA chip. They have no choice. This is what Illumina offers all DTC. The GSA takes 24 samples. Once you submit your saliva/spit LivingDNA has to wait for 23 other users before loading the chip onto the sequencer. It takes them 12 weeks (10-12 according to another report) to get those 23 other users. In other words, if the company recruits 24 users every 12 weeks, that’s 2 users per week and ~10 users per month. If the company charges $100/user they make $1000/month. My neighbour makes more than that babysitting and she doesn’t have a $1M Illumina sequencer sitting in her living room and eating reagents that cost $30/sample. Add to that overhead, lab costs, and marketing costs and you’ll get to $50/sample. In other words, LivingDNA is left with $500/month, not including taxes, rent, profit, and salary costs. These are very round numbers, LivingDNA actually charges $79, so its margins are close to nothing. User traffic varies over time, of course. Let us assume that the above calculation is off by a factor of 10 and LivingUK has now 100 users/month. Even with $5,000/month LivingDNA probably never recovered the cost of their $1M Illumina sequencer.

Of course, it is possible that the waiting time is so high because LivingDNA has so many users that their sequencer works day and night just to keep up with the demand. Yeah right. Where are all those technicians? Where are all those matches that users should have seen by now? I have been involved with this industry for the past decade. Processing time is a pretty good indicator of the number of users (and the number of sequencers, which in this case, we can safely assume is 1).

To enrich its database, LivingDNA invites users to upload their data. These uploads are free for the users and add to the company’s running costs. Users should have no reason to prefer LivingDNA over GedMatch, which has the largest database. Even the price tag of nothing is not attractive enough. Ask Yaniv Erlich who attracted only 60K users in the first three years.

Extrapolation is a risky science when small numbers are involved, but by looking at the number of YouTube, Facebook, and Twitter followers of LivingDNA and comparing those with the same figures of larger companies who reported their number of users, it seems that LivingDNA has between 5,000 and 10,000 users, certainly no more than 50,000 (assuming that there was a big hype when it’s launched). That is still not enough to bring them to the black line.

Why LivingDNA must die? 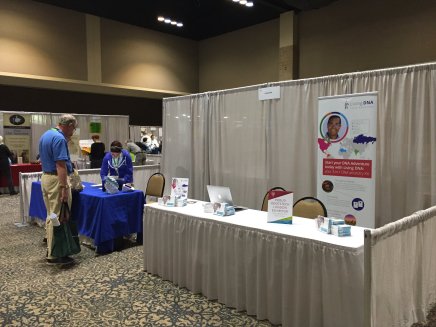 This sad picture of an abandoned booth tells the story of LivingDNA.

My guess is that LivingDNA will die soon for two very obvious reasons. First, because they are not profitable, period. Second, because they provide incorrect results. The majority of the public has very little tolerance for companies that sell nonsense results. The market will eventually show them the way out. They already did, LivingDNA YouTube channel has only 47 subscribers and just about 77 Twitter followers.

Disclosure, I consult HomeDNA for whom I developed GPS Origins. I do not consider this product to be in competition with LivingDNA’s tool, because it doesn’t tell everyone that they are English. Nonetheless, I provide full disclosure as always.

3 Responses to Why LivingDNA must die?